Staff was startled this afternoon when arriving to open for the day, that the UFO, which had been lodged in the roof for the past week had disappeared!  Not only had it disappeared, but the gaping hole in the metal roof was gone too, as though it had never been there.

“Must have been the coffee from the Palm Cafe’,” quipped DFAC’s associate executive director, Ken Hannon. It gets me going in the morning too!”

Search of the night’s security footage turned up a blank, but the visitor obviously didn’t want to exit without leaving a message.  Scrawled across the entrance way sidewalk, with those familiar three-toed footprints leading to and from was a message close to DFAC’s heart. There, written in what appeared to be green chalk was the statement “Where the ART is!” with an arrow pointing to DFAC’s entrance.

“We’d like to think that the visitor agrees with our tagline” said Todd Still, DFAC’s youth education director.” But it may have been just pointing the way to what appears to be a self-portrait that it left hanging in our Gift Shop.  If you look closely, this is the painting that was being worked on in our painting studio a couple of nights ago,” Mr. Still pointed out.

“We knew something special was going on from that first night in the David L. Mason Children’s Art Museum and we’re thrilled to have this painting” concluded George Ann Bissett, DFAC’s executive director. “But we’re an art center and not a museum, so we won’t be able to keep it.  We’ll have it on display next weekend for our Trashy Treasures/Contain It!/EAT THIS! event and then it will go to the highest bidder at our annual Garden Party, April 28th.  What collector wouldn’t LOVE to have an out-of-this-world piece of art like this!”

Though this appears to bring to an end, this saga of the visit from who knows where, officials still suggest that you LIKE DFAC’s facebook page to stay in contact about any additional information on the @dfac #alien and other events @dfac. 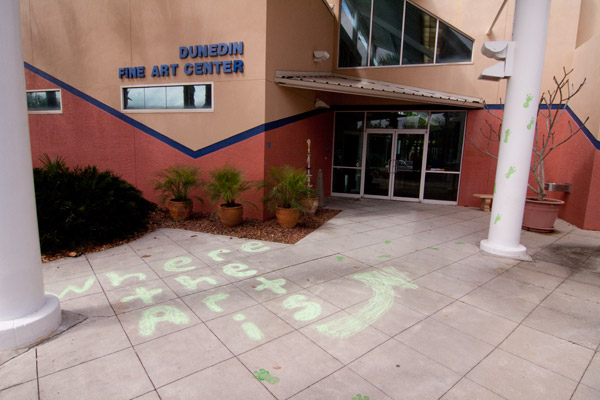 Even though DFAC staff knew where to look when they reviewed the nights security footage, it took all day and into the evening to turn up this appearance.

“We were looking in all of the teaching studios, because the visitor had shown such a propensity for artistic pursuits” said Todd Still, DFAC staffer.  “We went over and over all of the footage from the studios.  It was only when investigators turned their attention to the other cameras that they found what we were convinced would be there.”

“I’m thrilled that our visitor is exploring all of the rest of the great stuff DFAC has to offer,” said staffer, Suz Priest.  “I mean sure we’re known for our award-winning faculty and classes, as well our children’s programs, but there’s more to DFAC than just education.”

“The Palm Cafe was installed not long after I started here” offered DFAC staffer, Ken Hannon, “so it’s always been close to my heart.  As everyone knows, Stephen & Michael make some delicious food, but it looks to me like our visitor is enjoying a cappuccino.  I knew coffee was international. Who knew it was interplanetary?”

Officials are concerned that the caffeine in the coffee may fuel even more activity. Neighbors are asked to be on guard and may  report any suspicious activity by calling 727.298.DFAC or by checking in on facebook with Johnny, the young investigator who is helping them work the case. 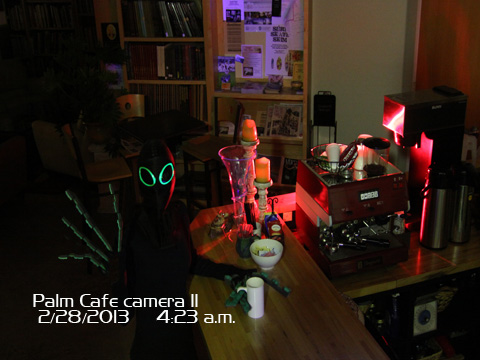 DFAC staff knew where to look when they reviewed the nights security footage.  It was the camera in the clay studio that provided pay dirt this time around!

“We’re not sure WHAT it was working on,” noted George Ann Bissett, DFAC’s Executive Director. “Whatever it was, it was fast about it, that’s for sure! Didn’t it look like it was glowing?”

“That was certainly not any of our clay it was working on,” concluded Catherine Bergmann, Adult Education Director.” It had an other-worldly look to it. In fact, it looked to me like it was glowing.  What we need is Johnny back here with some of his investigative equipment to see what he can figure out about that wheel the alien was working on.”

The Johnny Ms. Bergmann was referring to stopped by DFAC yesterday with his equipment. He took measurements and made diagrams, as well as interviewing DFAC staff. You can see pictures of Johnny on-site at DFAC on their facebook page : http://www.facebook.com/pages/Dunedin-Fine-Art-Center/132434936766610.  As you can see, Johnny is asking for assistance in cracking this case.  You can “like” DFAC and follow Johnny’s progress on facebook.

Officals are getting more excited and are working with DFAC staff to monitor the cameras throughout the facility. The public is asked to continue its vigilance and report any unusual activity to 727.298.3322. Or you can keep up with the investigation via facebook.

DFAC staff was SURE they were going to find more footage of their “alien” visitor when they reviewed the nights security footage.  They were terribly disappointed when at first they saw nothing on any of the cameras.  It was only after viewing the footage in slow-motion that the frame pictured below became apparent.

“This shows us that visitor is capable of some pretty incredible movement” said Todd Still, DFAC’s Youth Education Director.  “We expected this might be the case from the first night, when it appeared that it walked to the door and then just disappeared.  I mean this is incredible speed it’s exhibiting. One frame is just 1/30 second!”

“I think it’s interesting that the visitor has started to show an interest for some of the other things we offer here at DFAC” noted Associate Executive Director, Ken Hannon.  “Not only is it fast, but it looks like it exhibited some blazing talent in our painting studio too”

DFAC Staff continued to meet with officials and to monitor the cameras throughout the facility. The public is asked to continue its vigilance and report any unusual activity to 727.298.3322. 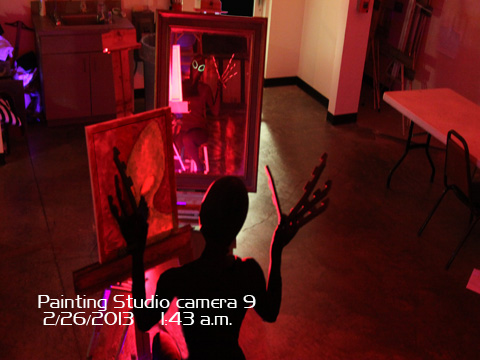 Prompted by mounting evidence that an encounter of the REAL kind might be in the offing, Dunedin Fine Art Center (DFAC) staff spent hours combing surveillance footage from their 17 camera locations.  It was a daunting task noted DFAC’s Executive Director, George Ann Bissett, but we really need to start getting some answers about what’s going on around here.

When Camera 2 in the David L. Mason Children’s Art Museum, revealed a late night visitor, Todd Still, DFAC’s Youth Education Director did a few cartwheels across the atrium while shouting “I was right, I was right!”

Ken Hannon, DFAC’s Associate Executive Director, noted that Mr. Still’s conjecture about the strong drawing power of the BLAST OFF exhibit seemed have some bearing.  With the hands-on nature of its Gemini Space Capsule and its Space Shuttle, it seems a logical landing spot for someone… well from outer space!

DFAC Staff met with officials most of this afternoon, plotting a strategy to monitor the cameras throughout the facility. The public is asked to continue its vigilance and report any unusual activity to 727.298.3322.

A family, visiting from Grovers Mill, New Jersey and taking an early morning stroll in Dunedin said they were surprised beyond belief when they were filming a family video with the “Tartan Turtle” at the Dunedin Fine Art Center (DFAC).  “All of a sudden there was this screeching sound in the sky and a crash that literally knocked our kids off their feet” said Mr. Oneal.  “Whatever was in that thing must have been awfully fast” offered Mrs. Oneal. “We were over there in a flash, and all we saw were the footprints… And they stopped at the door. That door never opened she said. But whatever it was was gone” In light of this video appearing, officials combed DFAC again from the classrooms, to the Children’s ART Museum and through the Cafe and Gift Shop.  No sign of anything out of the ordinary was uncovered, though officials now admit the SOMETHING is happening at DFAC. Again, anyone with information is encouraged to call 727.298.3322.

First, there was a hissing sound. Kinda like a fourth of July rocket , said Dunedin Fine Art Center (DFAC) neighbor Frank Wilmuth. It was right after 5:30 am he said, pointing out that he was so sure because he heard the sound right after his alarm, which he has set for 5:30 am went off.  Then there was a kinda greenish streak and then zingo! Something crashed so hard, it shook the ground he said. When he looked out of the window, he saw what he could only describe as a rather pointy headed individual disappearing through the door of one of DFAC’s studios.

Officials, suspecting a hoax question Mr. Wilmuth’s story. They point out that though there does indeed appear to be a ship of some kind lodged in the roof of the Dunedin Fine Art Center, a thorough search of DFAC turned up nothing suspicious, pointy headed or otherwise.

Mr. Wilmuth who is not backing down from his story, says that nobody has been able to explain those green, three toed footprints he claims run from the crash site, straight down the wall and into the painting studio.

Todd Still, DFAC’s Youth Education Director offered his conjecture that landing may be a response to the recent landing and ongoing investigation on Mars by the Mars Rover. He suggests DFAC may have been chosen due to the year-long exhibition in the David L. Mason Children’s ART Museum entitled BLAST OFF. The exhibition offers hands-on art experiences based on space travel both real and fictional.

DFAC’s Associate Executive Director Ken Hannon points out that Mr. Still has a very active imagination, but admits that this fact alone doesn’t mean that DFAC and the BLAST OFF exhibit were not targeted for what appears to be a space craft landing. Or perhaps that they were interested in DFAC’s upcoming Summer Art Academy, he posited.

Officials are proceeding cautiously and are asking neighbors to be on their guard though and to report any suspicious activity immediately. Anyone with any information is encouraged to contact officials immediately at 727.298.3322. 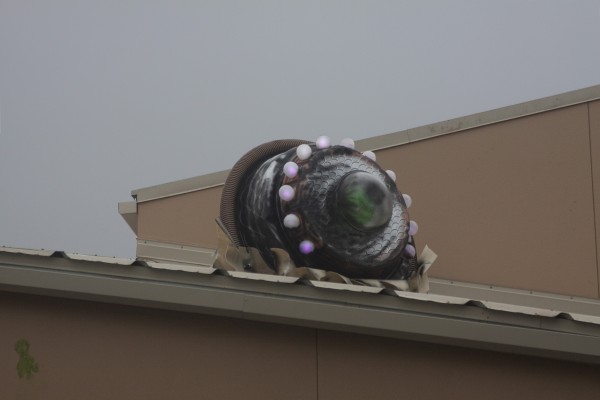 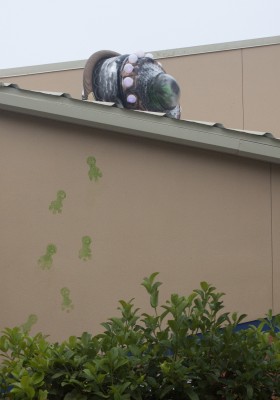