A Lasting Impression with Printmaking

“My mission is to make more printmakers and introduce them to all different kinds of printmaking,” Holly said. It’s a goal she and Stephen have in common: to share the art.

From foam blocks and potatoes to copper plates, blocks of wood, and linoleum, the matrices used to create prints can be widely varied. Relief printing is estimated to be about 1,000 years old, and its simplicity makes it particularly accessible to first-time artists. 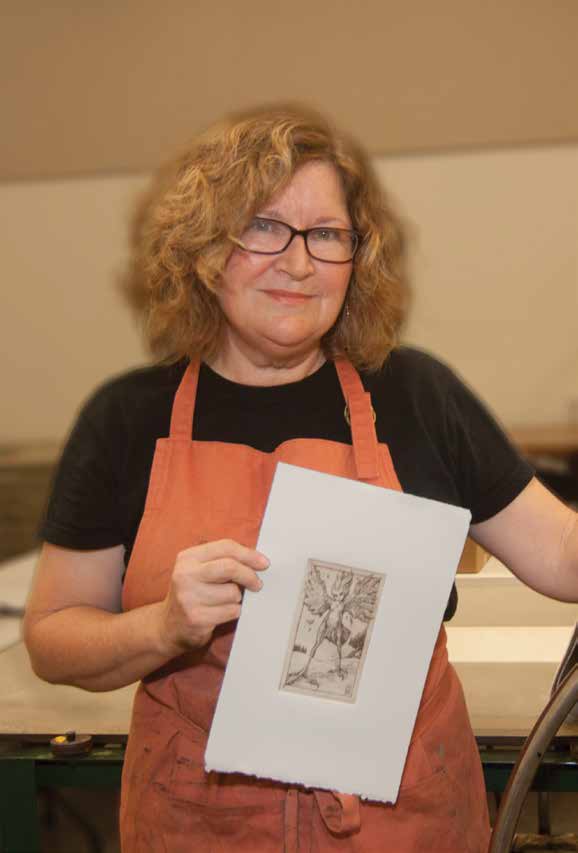 “You can walk in the door and not have any art background at all, make the simplest of images, carve it out and create art with it,” Holly said. “There’s no barrier to entry. There’s a real reward every time you pull a print.”

Intaglio printing can be more challenging. Some drawing ability and plenty of patience are required. But the rewards are multiplied, literally. Holly loves the process every bit as much as the finished product.

“My mission is to make more printmakers and introduce them to all different kinds of printmaking.” – Holly Bird

“I enjoy working with students,” she said. “I love the interaction. I’m a better artist because of that exchange of ideas.”

Currently, the students are coming from younger generations than when she started. With the younger students, the future of printmaking remains strong. If you would like to learn the art of printmaking, please click here to see which classes may appeal to you. 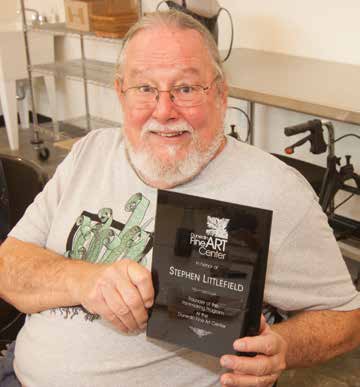 Like her predecessor and former instructor, Stephen Littlefield said, “I learned from my students, and my students learned from me.” “We all become colleagues. And Holly is a great example of that.”

Littlefield taught printmaking at the Dunedin Fine Art Center for over 20 years before passing the torch to Holly. He said his favorite thing about teaching is watching people do things that they didn’t think they could.

Falling in Love with Printmaking Again

A resident of Dunedin, Holly studied at The University of Florida, getting lost in plates of intaglio and often etching until the early morning hours, subtracting and adding to her textured compositions. However her focus was on graphic design, and she graduated in 1982 without further pursuing printing for more than two decades. Then, she attended Stephen’s printmaking class at DFAC and reawakened her joy for the art.

“I fell in love with it all over again,” Holly said. “I’m really fortunate to have had a long mentoring relationship with Stephen.”

Littlefield studied drawing, painting, and intaglio printmaking at the University of South Florida and Graphicstudio. In the late 1970s, he enlisted a local sculptor, Loyd Jones, to help build an etching press. They went on to build five more. DFAC uses the fourth, while press number one still actively resides in Stephen’s personal studio.