When looking to bestow their Patron of the Arts Award at the 9th annual Founders Luncheon, the Sterling Society auxiliary group of the Dunedin Fine Art Center didn’t have to look far for one of Tampa Bay’s outstanding patrons. It did however have to dig deep to unearth the roots of the awardee that extend back to the first days of DFAC. When the talk turns to quality of the students, faculty and supporters of the Dunedin Fine Art Center, Christopher Still is a name often bandied about as a perfect example of all of those groups. As Gail Gamble, a previous award winner herself noted, “when you look for a story that best exemplifies what the Dunedin Fine Art Center is, does and offers for the future of the community, Christopher’s career does the writing for you.”

Christopher Still grew up in Dunedin and took classes at the Dunedin Fine Art Center from its earliest beginnings.
Larry White, an art instructor and one of the founding members of the Dunedin Fine Art Center, was the one who suggested he enter the Scholastic Art Awards Competition. By winning that national competition, the only person from Pinellas County to ever do so, he received a full scholarship to attend the Pennsylvania Academy of the Fine Arts in Philadelphia.

After extensive studies in Europe and graduating from the Academy Still taught life drawing and painting at the Dunedin Fine Art Center when he first returned home in the late 1980s.  In 1989 he had a show at Syd Entel Galleries and that was how he was first featured on the cover of Tampa Bay Magazine.

Almost 30 years and many Tampa Bay Magazine covers later his paintings can now be found in museums and private collections throughout the country. In the Tampa Bay Area his work can be seen at the St. Petersburg City Hall, Tampa International Airport, Sandpearl Resort and Ruth Eckerd Hall.

Christopher has become nationally known for his work depicting Florida’s historic and natural beauty.  Most notable are his ten murals commissioned for the Florida House of Representatives.

With the help of Dunedin’s own honorable Representative Tom Anderson he became the youngest inductee of the Florida Artists Hall of Fame and he is now the Artist in Residence for the Florida Legislature.

This year’s award was an original by pastel by DFAC member and artist Mary Louise Pollock. The awards luncheon on January 29th at the Dunedin Golf Club also honored the late John G. Hubbard a long time supporters of the arts and of the Dunedin Fine Art Center in particular.  Guest speaker Lynn Whitelaw gave an informative talk about his thoughts after spending 40 years immersed in the Tampa Bay arts scene. He made a compelling case for the importance of programs such as the Dunedin Fine Art Center.

For more information on the Sterling Society and other DFAC programs visit  www.dfac.org, call 727-298-DFAC, or email info@dfac.org 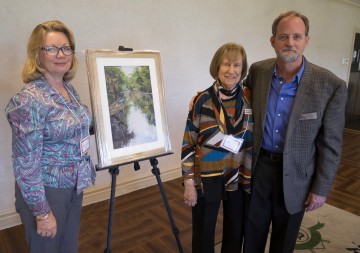