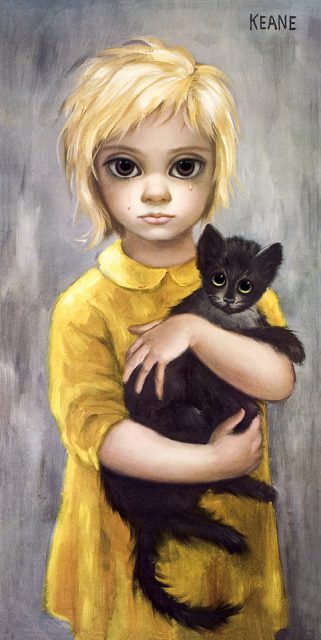 Community Call for Entries for a BIG EYES inspired artwork to be shown concurrent with the 43rd Annual International Miniature Art Exhibition + Trashy Treasures! Using the pop-culture works of Margaret Keane as a springboard, we want to SEE what you can do. Guest Juror + Cash awards! Guidelines are available HERE.  Deadline for delivery of works to be considered: January 5, 2018

Margaret Keane is an American artist. Creator of the “big-eyed waifs”, Keane was famous for drawing paintings with big eyes, and mainly paints women, children and animals in oil or mixed media in the 1950’s + 60’s. While the work achieved commercial success through inexpensive reproductions on prints, plates and cups, it has been critically dismissed as kitsch. One reviewer pointed to its ubiquity in discount stores: “They hung in Woolworth’s, next to the velvet Elvis, or maybe it was Walgreen’s, by the clowns. The work was originally attributed to Keane’s husband, Walter Keane. After their divorce in the 1960s, Margaret soon claimed credit, which was established after an in-court “paint-off” in Hawaii.] A resurgence of interest in Margaret Keane’s work followed the release of Tim Burton‘s 2014 biopic Big Eyes. Now in her nineties, she maintains a gallery in San Francisco which boasts “the largest collection of Margaret Keane’s art in the entire world.

All students and members are eligible to exhibit one work of art in any medium, competing for cash prizes selected by a Guest Juror. Delivery of works: February 19 + 20, 2018

7th Annual Shadow [box] Exhibition + event with thanks to community partners – TAMPA IKEA. Works will be displayed for 2 weeks prior to the Friday night event. (Shadowboxes are provided at the time of registration.) Delivery by May 1, 2018