ONE YEAR IN FACEBOOK JAIL: A Tale of Artificial Intelligence Gone Awry

This week marks the one-year anniversary of a 46 year-old Pinellas county cultural institution running into the buzz-saw of a social media giant’s algorithm-driven artificial-intelligence assassin.

On April 20, 2021, the Dunedin Fine Art Center attempted to celebrate the award-winning artists from its’ #SMF student & member exhibits by posting the winners to their Facebook page.  The 12 student and 12 member award-winning images were uploaded in their respective groups. Within 1 minute, we received a notice on Facebook that some of the content being uploaded appeared to violate Facebook’s Community Standards, and asked the question did we still want to continue.  It explained that a review process would determine whether the content would be allowed.  We were very aware of Facebook Community Standards, so chose to continue.  Within the next minute, DFAC’s Facebook page, AND the personal page of their Communications Director, Ken Hannon (Facebook business pages must be connected to a personal page) were both disabled. 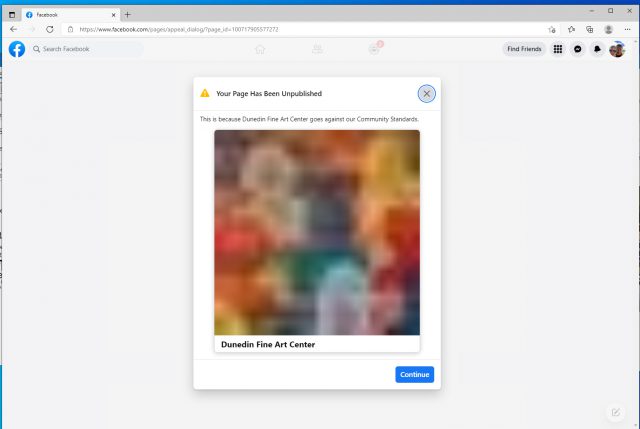 A quick check of Facebook’s Community Standards revealed that they had not changed from what DFAC thought and that indeed, the photograph that had triggered the action was allowed under Part III. Section 14 of the published standards, which states in part that, “We also allow photographs of paintings, sculptures, and other art that depicts nude figures.”

Every attempt to contact Facebook regarding this error was met with the message that a review had already been requested. 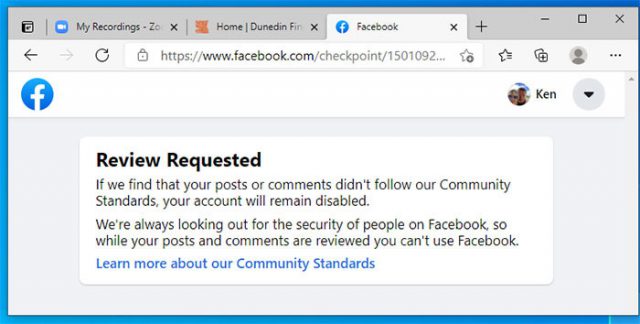 That was until approximately June 1, 2021, when the message changed to the deadly: 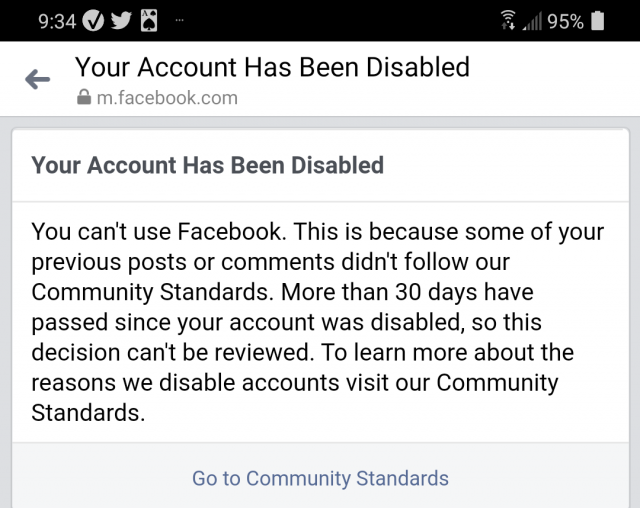 The irony of a platform that purports to “bring people together,” relying on algorithms and AI to decide customers fate, with NO HUMAN INTERVENTION was not lost on us. The fact that we were obviously in the midst of a classic “Catch 22” wasn’t either.

In addition to all of the unsuccessful attempts to contact someone, ANYONE at Facebook, we decided to start a new page for the community-based Dunedin Fine Art Center.   We worked for several weeks, building back content to give the new page some weight and volume of information.  Just as it reached a point where were ready to share it with the world and start to rebuild our community of 12,500, we received this: 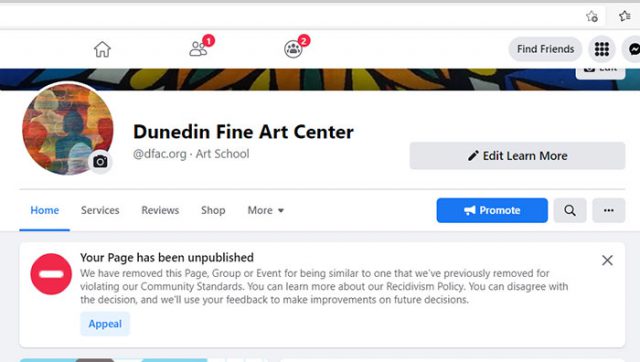 We of course attempted to appeal it, as was apparently offered, but we had forgotten the catch… 22 that is… We were met again with:

We continue to attempt to reach someone who will champion our cause at Facebook. We know it will take just one person. One Human being to break through the Artificial Intelligence Algorithm.  Or maybe Facebook has already gone too far… Become so devoid of actual human interaction, that they are unreachable.  We’re optimists, so we choose not to believe it.

So it is here we find ourselves one year later reaching out to every human being we can reach, asking everyone… Do you know someone at Facebook… Can we find ONE human being to be our champion?  We’re looking to restore our faith in so much…