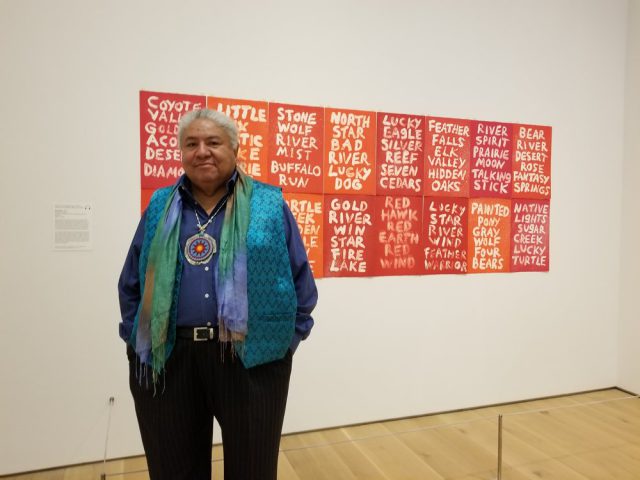 In 2007, Heap of Birds’ artwork was chosen by the Smithsonian’s National Museum of the American Indian as their entry towards the competition for the United States Pavilion at the 52nd Venice Biennale.

He studied at the University of Kansas, Lawrence (BFA, 1976), undertaken graduate studies at the Royal College of Art, London (1977) and attended the Tyler School of Art, Philadelphia (MFA, 1979). He was named USA Ford Fellow in 2012 and Distinguished Alumni, University of Kansas, in 2014. Honorary Doctor of Fine Arts and Letters degrees have been awarded by the Massachusetts College of Art and Design, Boston (2008), Emily Carr University of Art and Design, Vancouver, Canada (2017), and California Institute of the Arts, Valencia, (2018).

Retired from teaching at the University of Oklahoma after 30 years of service, Heap of Birds is now Professor Emeritus in the Native American Studies Department. Professor Heap of Birds’ seminars explored contemporary Native American art issues within the visual arts, film, and museums on local, national, and international levels.